For my latest project I’ve been working on building a basic match three game - I’ve never built one, so it seems like good practice (and it’s a nice, well-documented idea that I can iterate on).
I focused at the start on building something that looked basic but still decent, and then adding as much juice as possible to animations and sequences - I think the results have already paid off, and I’m excited to see how it all pans out once the project is done.
It’s not quite ready for primetime, so I’ve only got some gifs to show off.
This is what it looks like when you try to make a non-scoring (no matches) move:

Originally the idea was to procedurally generate challenges for you to play, so the sidebar of the game was information about your challenge as well as a timer for you to complete it. The game has changed a little bit, but this is what that used to look like:

There was going to be a screen where you got to choose how you wanted to play: 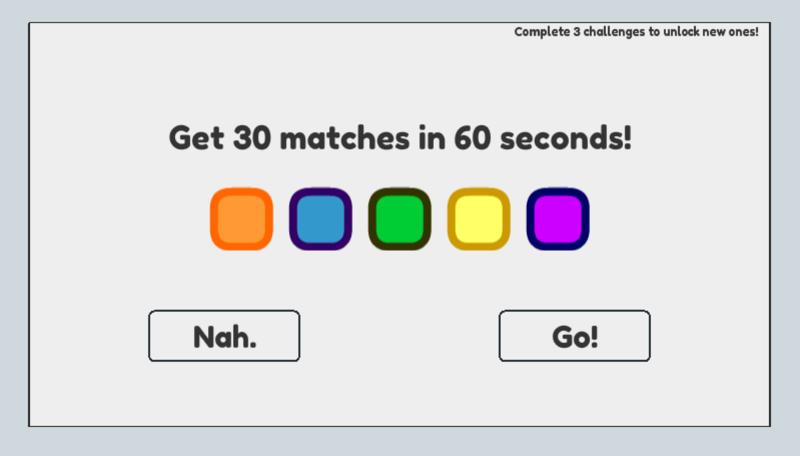 The next version is going to be a lot better, though.
This is actually a bug in my match removal code - it’s too aggressive, and you can see it removing the orange tile underneath the yellow match:

(I’m working on fixing it right now).
And lastly, here’s a little shot of the “you lost” screen, which is full of swoops and fades.

Looking forward to having a finished build of this soon! But for now, just gifs.
I think Talent is Overrated, so I'm trying to build as much as I can in order to continually improve.